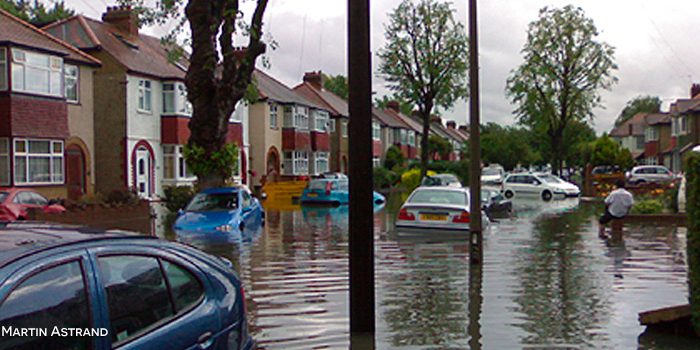 The London Borough of Sutton has suffered significantly from flooding in recent years.

As climate change is predicted to further increase the frequency and intensity of flood events, Sutton?s local planning authority has developed spatial planning policies to address the risk of all forms of flooding, along with other climate change impacts, to and from new developments and to promote the role of sustainable urban drainage systems in managing surface water runoff.

The Borough is affected by a number of different sources of flood risk, including fluvial (river) flooding, surface water flooding, sewer flooding and groundwater flooding. Additionally, under the medium emissions scenario from the UK Climate Impacts Programme, by the 2080s the number of days with rainfall greater than 25 mm is likely to increase by 100%-250% in winter and by up to 100% in summer.

The aim of the initiative has been to ensure that the Council?s policies on climate change adaptation and flood risk included in spatial planning documents guiding future development within the Borough avoid, reduce and manage flood risks while promoting the multi-functional benefits of green and blue infrastructure. Such benefits include: increased green and blue space, which helps the area to adapt to increasing temperatures and the urban heat island effect; provision of recreational amenities; improved quality of life for the local community; and, increased biodiversity.

The process of implementing the initiative involved integrating the policies into the Local Development Framework (LDF), which is a suite of documents setting out the spatial strategy and policies for the development and other use of land in the local authority’s area. One of the main obstacles was the limited cross-departmental information exchange, which was overcome by the establishment of a Flood Group, comprising representatives from the departments of planning, environment, emergency planning, highways and external parties.

An evidence base was required, which used information from the UK Climate Impacts Programme, a Local Climate Impact Profile and a Strategic Flood Risk Assessment. In support of this, existing good practice was draw upon, including the handbook produced by the UK Town and Country Planning Association ‘Climate change adaptation by design’. Stakeholder and public engagement also formed a key part of the implementation process.

Progress made as a result of the project is monitored and evaluated annually through an annual monitoring report, sustainability appraisal and the Code for Sustainable Homes. The inclusion of adaptation approaches to flooding within Sutton?s planning policies has the potential to considerably affect the form and function of new development sites.